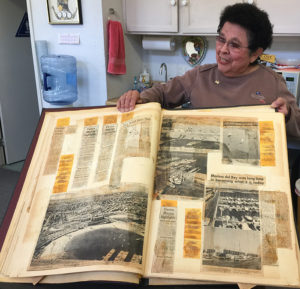 An extraordinarily comprehensive history of Marina del Rey Harbor’s early years, as told by the collected newspaper clippings of that era, has been made available to Marina del Rey Historical Society (MDRHS). The eight-volume large format scrapbook collection includes hundreds of news clippings reflecting dozens of mostly local publications. “We are grateful to Los Angeles County Department of Beaches and Harbors for making these valuable archives available to us on an indefinite loan basis,” remarked MDRHS president Willie Hjorth, seen holding one of the volumes on the left.

The following is a sampling of the various news topics– and print news media– of Marina del Rey 50 years ago, gathered from the scrapbook volumes.

The year is 1967. Marina del Rey’s development, stalled for several years by storm surge wave damage, now remedied by completion of a breakwater in early 1965, is racing forward. “Marina del Rey Scored Major Gains During 1966” reports an article from January 5, 1967. The Marina is quickly filling up with vessels. 50 boats participate in an on-water Easter Parade in March, 1967.

The May 4, 1967 (Venice) Vanguard reports “Renovation Starts on FDR’s Yacht,” referring to the Potomac, a 165’ Coast Guard cutter built in the 1920s, and converted in 1935 into a presidential yacht.

Traffic Control - on the water and the streets - CYC dedication

In June of 1967, local newspapers report plans to partition the main channel (with buoys, of course) — until then, it’s been a free-for-all among boaters. On land, installation of $38,405 worth of traffic signals gets the green light. There is a 90% occupancy rate at Dolphin Marina apartments. Castagnola’s Lobster House has opened. California Yacht Club’s new facility, on the triangular parcel between basin F and Main Channel, will be formally dedicated “on Saturday, at 2:30 p.m.” reports the (Santa Monica) Evening Outlook, June 9, 1967.

A “master plan for all of the unleased Marina del Rey land” is among agenda items of a joint meeting of the Small Craft Harbor Advisory Commission and Marina del Rey Design and Control Board, reported by the (Venice) Vanguard’s June 13, 1967 issue. Additional meeting topics: Permission request to use a portion of land for a boat sales business by the Holiday del Rey Marina on Panay Way; Permission for a 28-unit mobile home park situated on Mariner’s Bay Marina parcel; Revision of plans for Mr. D’s Restaurant, under construction (Mr. D’s was on the site of the current California Pizza Kitchen, in Waterside Marina del Rey shopping complex).

Boy's Market and other merchants

There are 17 commercial anchorages; 3,371 available boat slips are now 86% occupied (2,899, up from 2,622 the prior January), reports the Vanguard on October 2, 1967. News emerges of a New England-themed shopping center being proposed (the future Fisherman’s Village).

The local news cycle makes mention of a bike path: “. . . detailed routing for proposed Marina area bikeway, stretching from Santa Monica to Playa del Rey, has been agreed upon by members of the Marina Area Chamber of Commerce’s biking committee,” states an article from Westchester News, October 8, 1967

“Auto Congestion Choking Marina del Rey and Area” belches a sensational headline that appears in the South Bay Daily Breeze (October 26, 1967) and also in its locally affiliated El Segundo and Playa del Rey Beacon. And it’s not just automobiles polluting the area. The legacy remains of an unsightly infestation of drilling rigs on the Marina Peninsula. “Venice Plan Would Banish Oil Fields” reports Roberts News of Venice, California, November 9, 1967, referring to the Marina Peninsula’s “Transformation of an unsightly oil field into a multi-million dollar apartment complex”.

Celebrity boat ownership has always remained relatively low-key in Marina del Rey, but the Star News (November 17, 1967) scoops the story of the vessel Stardust owned by Dick Smothers of the CBS Smothers Brothers Comedy Hour. In fairness to Smothers family members, the article also makes mention of a second boat owned by Dick’s brother Tom Smothers. Both vessels are docked in Basin A.

The Flying Nun with Sally Field

And, in the television series The Flying Nun, Marina del Rey serves as the film location pretending to be the story’s convent in San Juan, Puerto Rico, whose gentle breezes are sufficient to bring the main character, played by Sally Field, aloft. Marina del Rey’s breezes, however, prove insufficient, so film footage of the main character’s flights are instead made possible by some posturing aboard a boom crane, not visible in the series, but all over the local papers.

Up on the hill, the merger of Loyola University and Palos Verdes Peninsula’s Marymount College is reported by the South Bay Daily Breeze (December 5, 1967), along with news of the construction groundbreaking of the first womens’ dorm on campus.