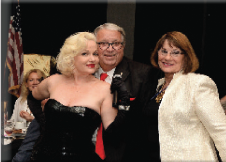 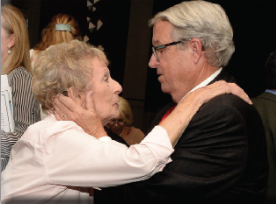 Captain Balian also gave a very big tribute to Greg Wenger, and wife Mimi, for Greg’s years of community service culminating in founding of the MdRHS.

A TRIBUTE! video of interviews of several Marina notables describing Supervisor’s memorable moments, recorded by Patrick Reynolds, was shown as well as a powerpoint presentation combining Marina history and Supervisor Knabe’s life. Keynote speaker Kerry Silverstrom, Chief Deputy Director of Marina del Rey, told of her and her husband’s emotional experience in becoming recipients of the Safe Surrender program with the addition of their son. Supervisor Knabe authored the law in 2002 now state-wide which
is responsible for 145 babies being saved. 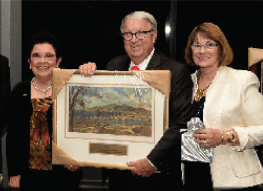 MdRHS gifted the Knabes with a framed 1962 painting reproduction (#2 of 400 giclee limited prints) of the Marina being dredged. The original oil was painted by artist JoAnn Cowans from her balcony atop Playa del Rey. She had been saving #2 for a very special event, and this was it! Thank you JoAnn for this very fine art quality memento which will hang in Supervisor Knabe’s Cerritos history museum.

A huge THANK YOU goes to the COMMITTEE for their overwhelming success in creating a very memorable and joyful TRIB UTE! The Marina del Rey Historical Society extends a debt of gratitude to all TRIBUTE! sponsors and attendees for their sponsorship and continued support.